How Presidents Died & How We Would Treat Them Now 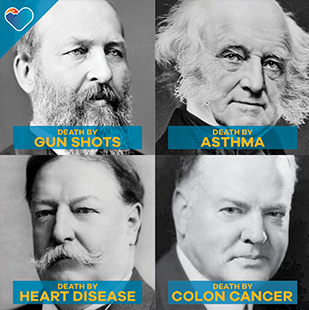 Throughout the history of the United States of America, there have been 43 presidents who have governed our nation (45 presidential terms because Grover Cleveland served twice). With only four former presidents and one current president alive today, Denver Health experts dived into how our past Commanders-in-Chief died and how we would treat them now.

James Garfield was elected as the United States’ 20th president in 1881, after nine terms in the U.S. House of Representatives. His Presidency was cut short after 200 days when he was assassinated. He died from infection and internal hemorrhage after getting shot. One bullet grazed his shoulder and the other landed in his back, passing the first lumbar vertebra but missing the spinal cord before coming to rest behind his pancreas.

What is the Best Way to Treat Someone with This Type of Gunshot Wound?

"Medicine has come a long way since President Garfield was shot in 1881," said Eric Lavonas, M.D. a physician in Denver Health’s Emergency Department.

"The bullet did not strike any major organs, arteries, or veins. Today, the infection that ultimately took President Garfield’s life could have been treated with antibiotics. Since 1881, we’ve learned not to probe wounds with dirty hands, and in most cases, removal of the bullet is not necessary at all. Although stabilizing a bullet-shattered spine is a major operation even today, our spine surgeons have experience with thousands of such cases."

“Today, tuberculosis is preventable and treatable, but it still kills 1.5 million people globally each year due to barriers to diagnosis and treatment. At Denver Public Health, we focus on finding and treating people at risk for TB to protect their health and the health of those around them.”

Herbert Hoover served as the 31st president of the United States from 1929 to 1933 during the Great Depression. He died in 1964 due to colon cancer. There are multiple questions we should ask to understand how to prevent and treat colon cancer.

What Can We Do for Colon Cancer Now?

“Screening is the most important thing to reduce the risk of cancer,” said Michael Cowen, RN, BSN, operations manager of Denver Health’s Gastrointestinal Lab and Neurodiagnostics. “The most effective way to do this is with regular screening colonoscopies (based on family history and between the ages of 50 to 75). The other screenings available are annual fecal occult blood/fecal immunochemical tests and genetic testing."

What Can People Do to Help Reduce Their Risks of Getting Colon Cancer?

“Age, family history and obesity are the highest risk factors for colorectal cancer, so regular screening and healthy diet and exercise are the most important ways to decrease the risk,” said Diogo Barbosa, patient navigator at Denver Health’s GI Lab and Neurodiagnostics. “Also, a history of smoking has been associated with cancers so cessation is very important as well.”

“Insurance now covers screening colonoscopies starting at age 50,” said Cowen. “Colonoscopies can be a preventative procedure if done regularly; polyps can turn into cancer if not removed, and we now have excellent technology to remove the polyps and also analyze them to determine the risk of cancer.”

William Taft, the 27th president of the United States from 1909 to 1913, died from heart disease in 1930, a little more than a month after being diagnosed. Today, heart disease is the leading cause of death for both men and women in the U.S. according to the CDC.

Can Someone Die from Heart Disease a Month After Being Diagnosed?

“Someone can die a month after being diagnosed with heart disease if they don’t take their medications and get their risk factors under control,” said Amanda Hajoglou, MS, RCEP, CCRP, lead clinical exercise physiologist, Denver Health Cardiology.

What is the Best Way to Prevent Heart Disease?

“The best way to prevent getting heart disease is to decrease risk factors you have control over like smoking, hypertension, diabetes, not exercising, high cholesterol, stress, drug and alcohol use,” Hajoglou said. “There are some risk factors you cannot control like gender and family history.”

Martin Van Buren, the eighth president from 1837 to 1841, died of bronchial asthma and heart failure in 1862. Asthma is not something you think about when you hear someone has died nowadays, so is it still possible to die from asthma?

“Yes, unfortunately, it is still possible to die of asthma,” said Sarah Roark, M.D. medical director of Denver Health’s Pulmonary Rehabilitation Team. “While rare, usually these are cases where care has not been sought quickly enough or the condition is hard to control at baseline. While asthma has been described for a long time, the interaction between the lungs and the immune system remains an area of intense study.”

How Can You Treat Asthma?

A step-wise asthma action plan can be made with a health care provider. If there are questions, a patient may be referred to a pulmonologist (lung doctor) for guidance and treatment.

James Polk, the 11th president of the United States from 1845 to 1849, died of cholera, an infection of the small intestine. Cholera is caused by the ingestion of food or water contaminated with the bacterium Vibrio cholera.

Is Cholera a Threat Today?

“Thankfully, in the U.S. today, most people are not at risk for Cholera because we have been able to take a multifaceted public health approach to control cholera and to reduce deaths.

This includes a combination of surveillance, water, sanitation and hygiene, social mobilization, treatment and oral cholera vaccines. If anyone plans to travel in an area where there is cholera, please consider getting the vaccine – offered at Denver Public Health’s Travel Clinic to stay healthy.”