A Lifelong Eating Disorder Battle – and How I Survived: Betty’s Story 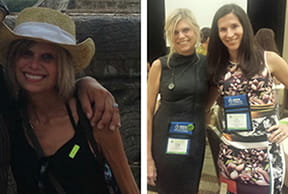 Shortly after my 44th birthday, in March 2014, I arrived at the ACUTE Center for Eating Disorders at Denver Health. I came to ACUTE after leaving a partial hospitalization program close to home in California. At first, my husband, my family and I were convinced we made the best decision to try the California program, a place that touted eating disorder treatment, with eager promises of help.

But after being accepted into their program, it became clear that it was a very poor and dangerous decision – with some experience under my belt, I now realize that treatment should not feel like babysitting. At ACUTE, I finally found a team and program that helped save my life.

A Lifelong Battle with an Eating Disorder

I grew up in a family with disordered eating. Meals were feast or famine. I was punished for not belonging to the “clean plate club,” and I learned to assert myself by refusing to eat. Later on, while floundering at the onset of adulthood, my eating disorder stepped in. When so many things were uncertain and out of my control, my eating disorder taught me how to control my body (and my life). I did it very well. In 2013, I married my high school sweetheart. As we’d been out of touch for 24 years, I told him that my emaciated appearance and behaviors with food and restroom use were due to a “sensitive stomach” and other health conditions. But the truth was that I was going through stages of bingeing, purging, and restricting, and my body was being pushed to the most extreme limit.

My life was a lie and complete mess. I was wearing layers upon layers of clothing in an attempt to hide my body. I lost my job as a tenured public school teacher because of my disorder. I was spending an outrageous amount of time and money buying (and hiding) laxatives, exercising (at home, the gym, and in my classroom during recess), buying groceries to convince my husband and others I was eating, and then spending time in the restroom eliminating whatever I ate. I couldn’t and wouldn’t go anywhere if there wasn’t a restroom and I’d panic if I couldn’t find it, it was out of order, or occupied. I was petrified when I realized other people knew. I was scared of being judged, losing my privacy and independence, and especially stopping what I was doing.

I sacrificed everything to conceal and protect my eating disorder. After discussion with my family and husband, we found a nearby program in California – one without medical stabilization.

There is no sound reason I was accepted into a partial hospitalization program (PHP). I was honest about my excessive laxative abuse and expected to “taper down” by so many every few days. My body mass index was in the “severely emaciated” range with a comorbidity of other physical and psychological complications. Any online search indicates a clinical recommendation of immediate hospitalization until “medical stabilization” is reached, followed by inpatient treatment, residential treatment, and then PHP treatment.

Instead, I was running the race backwards and got worse. The program was seven hours a day for five days a week, four hours on Saturdays, and NOTHING on Sundays. I was expected to stop old behaviors, feed myself outside of program, and bring my own food on Saturdays. Not having changed my behavior patterns, during my off times I started compensating (overly so) for the calorie intake and lack of movement during the program. I got worse. I was told my eating disorder and other behaviors “had a hold on me,” and was made to feel like I was a failure for not progressing in their program, and that my lack of progress was my fault. After a fourth week of actually dropping weight, my husband looked into other options.

He started calling residential and inpatient treatment facilities, but was told by all of them I was too much of a risk for consideration and needed to be hospitalized until I was medically stable. It was the first time we were told about the risks of refeeding syndrome – a dangerous condition that occurs because of starvation. He looked into hospitals and was shocked by the lack of experience in treating eating disorders, especially in southern California. During one of his inquiries, someone mentioned the ACUTE Center for Eating Disorders in Denver. I left the PHP on a Friday evening, and was at ACUTE on Monday morning.

When I arrived I was greeted at the front entrance and immediately put in a wheelchair. Something hit me at that moment. I was done, I was ready. I surrendered my wrecked body, mind, and life to a team of strangers. I looked out the glass doors and silently said goodbye to my life with an eating disorder. It wasn’t gone, not yet, but for the first time I could remember its voice was out of my head.

I was taken to the ACUTE unit and introduced to my treatment team. I emphasize the word TEAM because most everyone I was in the presence of, from the maintenance, housekeeping, certified nursing assistants (CNAs), meal deliverers, technicians, phlebotomists, administrative personnel, nurses, psychologist, psychiatrists, dietitian, AND doctors shared a genuine interest and personal investment in the beginning stages of my recovery. One thing that is special about ACUTE is everyone working in the unit is qualified, experienced, and wanting to work with someone like me.

To picture myself “recovered” previously seemed inconceivable and hopeless. At ACUTE I learned to celebrate the baby steps, and was supported in moments rather than months, weeks, days, or hours. I was coached and encouraged through my fears and self-abusive behaviors. I realized I could survive without an eating disorder and wanted a life beyond it.

An important part of my treatment at ACUTE was having a CNA with me 24/7. I wasn’t just a patient who needed to be supervised (for obvious reasons at meal times and restroom use). I was treated with dignity in situations that ordinarily would be terribly awkward and embarrassing (usually involving body functions). They made an effort to get to know me and helped pass the time by keeping me engaged and “busy” (in a non-physical way). They also gave me quiet time for rest and reflection. They took me for outings (in a wheelchair), walked with me around the unit (after I was cleared by the physical therapist), and took me to a room where I could pick out movies, games, books, and art supplies. They took their responsibilities of taking care of me seriously but they went above and beyond to make my stay as pleasant as possible.

While my thinking was moving in the right direction, my body was not (or at least it didn’t feel like it). After torturing and starving my body for so long, it was resilient to being nourished. My body was defiant and resistant to refeeding, lack of movement, and the stoppage of other abusive behaviors (in the PHP program, I was expected to do this on my own). I developed symptoms of refeeding syndrome with extreme edema all over my body, and painful abdominal bloating due to constipation. The ACUTE team was aggressive in their approach to make me comfortable while adamant about getting my body to work again. My doctors always delivered “bad news” with the promise and hope of another alternative. The charge nurses were very literal in writing down my goals for the day. After it was clear I was finishing my meals, my goals (written on the wipe board) were to “poop” and “fart.” There is NO WAY I could or would have gotten through this stage at home. I would have immediately gone back to my behavior patterns to ease my discomfort.

Speaking of being at home, I’m glad I wasn’t there. Well-wishers and do-gooders with helpful intentions were kept at bay. Eating disorders are often triggered and given strength by others’ comments and unsolicited advice. I let go of worrying about taking care of my household and left it to my husband and family. I was never confronted about payments or fiscal arrangements, even after I was released. I felt insulated, protected and safe. I was allowed the freedom of having personal belongings and access to a television, my cellphone, and laptop at all times. I appreciated being able to make reasonable choices with my meal menu.

I developed a personal bond with ACUTE’s Dr. Jennifer Gaudiani. We’ve been in touch since my stay and I know I’ve never been just a patient to her. I fondly remember an interaction I had with her on my third day. I needed clearance from physical therapy to walk around the unit which I ask her to expedite. She put down her clip board, put her hands on her hips, and said something like, ‘The last thing you should be worried about is walking and moving.’ I was in the hospital, and not just any hospital. I was a patient in a place that only treats the worst of the worst cases of someone in my condition. She gave me a verbal prescription to rest and eat. That’s all I was accountable for -- resting and eating. For some reason, that got through to me. I had my wedding album with me. She looked through it and said I had a beautiful smile and dress but the body in that dress was very sick. She wanted me to send a new picture of me in a little black dress when I was further along in my recovery. She promised I’d have my beautiful pre-eating disorder body back. It took a while (and a lot of patience) but SHE WAS RIGHT.

Getting My Life Back

This is just a snapshot of my stay at ACUTE, my story, and the first baby steps of recovery from a life with an eating disorder. After my treatment, I decided to stay in Denver and continue treatment at an inpatient and finally PHP program (ACUTE arranged for my transfer) where I continued to progress and thrive.

These days I have a beautiful curvy body I’m proud to show off. I’m now 46 and thankful every day for the team at ACUTE for helping me find hope and saving my life. There is no doubt in my mind (and anyone who knows me) the TEAM at ACUTE saved my life. They treated my body to recover from the years of starvation and abuse. More importantly, they gave me hope, helped me to see my life without an eating disorder, and started building my arsenal for the rest of my journey.