Living My Best Life After ACUTE 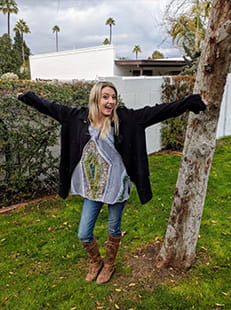 Since I was diagnosed at age 19 with Type 1 diabetes, the disease had controlled my life. By age 24, it was clearly starting to take a serious toll. I was exhausted and overwhelmed from trying to take care of myself every day, and I felt like it held me back from everything I had ever wanted to do. I reached a point where I was avoiding the disease altogether. I didn't know at the time that one of the worst complications would be something hidden and something that most doctors would shove aside: severe weight loss.

I had lost almost 30 percent of my total body weight in the course of three months. Four times in four months, I went to different emergency rooms, desperately seeking relief from symptoms of extreme pain and debilitating lightheadedness. I knew my weight loss was excessive, but I didn’t know what to do about it, and I received no valuable advice for my situation.

None of the doctors I saw seemed to take my low weight very seriously. One of my doctors actually put me on an extremely low calorie diet due to a diagnosis of gastroparesis, a condition which causes the stomach to not empty properly. The doctors blamed this condition, along with the other complications I was having, on diabetes itself. What those doctors didn’t recognize was that the symptoms I had were parallel to symptoms of a different condition: starvation.

The pain was constant, regardless of what I was doing. I couldn't eat without unbearable stomach pain. Eventually I stopped eating to avoid that pain, and inevitably, I completely lost my appetite and any desire to eat. On top of that, every single time I would stand, I would nearly faint. Within seconds of standing up, colors would fade to white and static would fill my ears as the world around me would start to tunnel. I remember crawling around the house to avoid this feeling, wondering if life was worth living if it would have to be this way. When I would look in the mirror, I would see a gaunt face I did not recognize in the reflection, with legs as small as toothpicks and ribs protruding from her back. I knew this wasn’t me. This was a weak, exhausted and defeated shadow of the energetic and happy girl I used to be.

I wanted to eat and enjoy food again, but I couldn’t. I wanted to walk, but it seemed hopeless, especially considering I couldn’t stand without the risk of fainting. I was at a breaking point. I was lost, in the dark and had no idea what was happening to my body. I knew I was dying but didn’t know how to help myself. I had nearly given up when I heard about the ACUTE Center for Eating Disorders and Denver Health. I reached out to them and explained my situation and the lack of care I had received at local hospitals. Within a day of submitting paperwork, they were able to admit me. They provided transportation for me from Denver International Airport, and upon arrival, the care was immediate. I was put in a wheelchair upon entering the building, which was a relief for me because of how difficult it was to walk. As scared as I was to be in a hospital without friends or family, I felt a sense of safety and comfort, knowing I was going to be looked after.

On day one, I met with Dr. Julie Knoeckel. I was pleasantly surprised at how much time she designated to speak with me one-on-one. In previous hospitals, I felt as though doctors would spend maybe five minutes talking to me. Dr. Knoeckel allowed me to ask questions and took the time to answer them honestly and knowledgeably. She informed me that she had been the doctor who had initially admitted me to ACUTE and explained to me how severely malnourished I was and how if I continued down the road I had been on before, I would not live much longer. We discussed my symptoms, and she talked about how starvation could be the actual underlying cause. She eased my worry by assuring me that they would help me to weight restore, and the complications might even go away.

The Endocrinology Team from Denver Health came to monitor my diabetes every single day I stayed at ACUTE, sometimes twice a day. They kept a close eye on my blood sugar trends to ensure I wouldn’t go into a state of severe electrolyte imbalance again. I am particularly grateful for the care I received from Dr. Daniel Bessesen, who came in to see me up to 14 days in a row. He made sure that I had training and knowledge for continued diabetes care after being discharged from the hospital.

Everything in this hospital wing was designed with care for people suffering from being severely underweight. The hospital beds were made of a special material designed to be softer on bony parts of the body, which allowed me to sleep peacefully for the first time in months. On each bed, there was a special blow-up blanket that would blow hot air all over my body, enveloping skinny cold bodies like mine, prone to freezing, in a warm blanket hug.

Every single day at ACUTE, I would have time to speak with my doctors, time with a physical therapist or occupational therapist and time to speak with a psychologist. It was the first time I had experienced an integrated medical team thoroughly communicating with one another. They provided many wonderful people in many different roles to care for me. The entire team, including all of my doctors, nurses, physical therapists, my dietitian and even a social worker, worked alongside me and each other to tackle my case and help me toward independent recovery. I could tell that each and every person who I saw at ACUTE genuinely cared about what they were doing and genuinely cared about me. Although my stay there was at the hardest time of my life, I knew my team was on my side. I felt that they did everything they could to make my stay as comfortable as any hospital stay could be.

It’s been more than six months now since I left ACUTE. I have a job on my feet that I love, where I get to run around without fainting. I now have an insulin pump, and my blood sugar is well managed. I love the foods I used to love again, and my digestive system works exactly the way it should be working. I am no longer in pain. I nearly starved to death on accident, and I cannot emphasize how grateful I am that ACUTE recognized the state my body was in, that my symptoms were symptoms from starvation and not directly from diabetes. There is such a lack of awareness in the medical field about the complications of being severely underweight, and I’m so glad ACUTE was around with the tools to bring me back to a normal life. Without the care from ACUTE, I know I wouldn’t be here today.