Ways to Give
TOP
Services Trauma Our Team 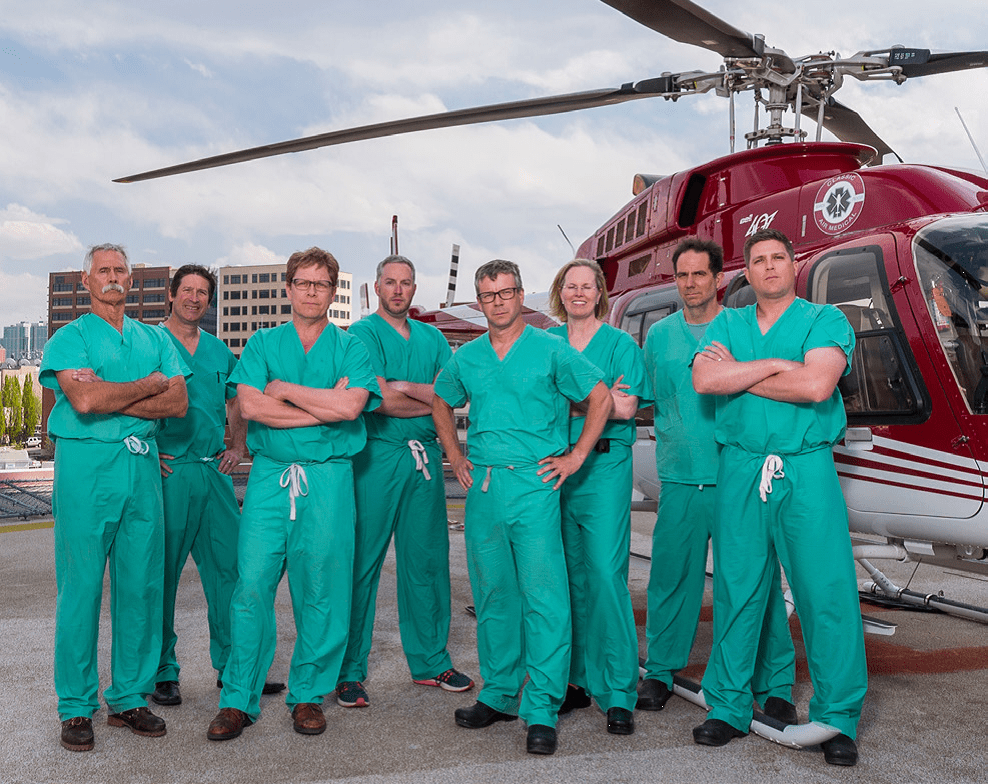 Our trauma surgeons are nationally and internationally renowned for both their clinical and research expertise. In 2017 alone, our surgeons gave over 175 presentations and published over 100 article in peer-reviewed medical journals.

For a full list of provider bios and details, use our Find a Provider search.

Mitchell Cohen is the Bruce Rockwell Chair of Surgery at Denver Health Medical Center and Professor and Vice Chair of Surgery at the University of Colorado. Clinically he is an active Trauma, General and Acute Care Surgeon as well as a busy Intensivist. Dr. Cohen has an active NIH and DoD funded basic science research lab, which studies coagulation and inflammation perturbations after trauma. Specifically, his lab continues to examine the mechanisms of traumatic coagulopathy and mediators of protein C system activation after trauma. In addition to its basic science focus the Cohen research group transnationally studies similar topics through multiple clinical characterization and interventional trials aimed at elucidating the post trauma coagulation milieu and optimal resuscitation and treatment. Finally, the Cohen group has an active interest in in silico data and model driven approaches to modeling of biological and physiologic systems. In keeping with this his group has done extensive work on the use of Big Data towards improving personalized medicine and outcomes. His work includes multi scale modeling projects ranging from coagulation and endothelial biology to causal inference prediction of patient physiologic state and trajectory.

Dr. Bensard was born and raised in Colorado. He grew up in the Denver area and attended Mullen HS. Subsequently, he attended the University of Colorado and graduated with distinction earning a BA in Biology. In 1986, he graduated from the University of Colorado School of Medicine with honors. Dr. Bensard completed his residency in General Surgery in 1992. During this time, he performed NIH funded studies in post-traumatic immuno-modulation as a research fellow in the Halstead Surgical Laboratory. In 1993, he completed additional training in critical care and vascular surgery culminating in board certification in Surgical Critical Care. In 1995, he completed a two-year fellowship in pediatric surgery at the Columbus Children’s Hospital. In 1995, he returned to the University of Colorado as a member of the surgical faculty and served as Chief of Pediatric Surgery at DHMC for eleven years. Dr Bensard served as the Director of Trauma at the Children’s Hospital from 1995 to 2006 until his departure to the midwest. He was appointed Professor of Surgery at the School of Medicine at the University of Cincinnati, and named Director of Pediatric Surgery at Peyton Manning Children’s Hospital. In 2009, Dr. Bensard returned home to join the Acute Care Surgical Faculty at DHMC and resume his previous position of Chief of Pediatric Surgery and Trauma. He is a visiting Professor of Surgery in the Department of Surgery, University of Colorado School of Medicine. Dr. Bensard is Board Certified in General Surgery Surgical Critical Care and Pediatric Surgery by the American Board of Surgery. Dr. Bensard is engaged in basic, clinical and outcomes research with special interest in pediatric injury and pediatric surgery. Dr. Bensard is a member of many regional and national societies including the American Association of Pediatric Surgeons, American Academy of Pediatrics, American College of Surgeons, Western Trauma Association, and the Denver Academy of Surgeons. He is extensively published in peer reviewed journals, has written multiple book chapters, and spoken in multiple venues as an invited lecturer in the fields of trauma, pediatric surgery, and minimally invasive surgery. He has been named to 5280 Top Doctors, America’s Best Doctors, America’s Best Surgeons, and Best Doctors in America. He has received the outstanding teaching award from both medical students and general surgery residents.

Dr. Burlew has been an active surgical investigator, educator, and clinician; she has received multiple awards in each of these areas including the J. Cuthbert Owens Award, the DHMC Award for Academic Excellence, the Bartle Faculty Teaching Award, the Academy of Medical Educator's award for Excellence in Mentoring, and the 2017 American College of Surgeons Travelling Fellowship to Australia/New Zealand. She serves on the Committee on Trauma for the American College of Surgeons and the Board of Managers for the American Association for the Surgery of Trauma. She is also serves on national committees for the Western Trauma Association and is the immediate Past-President of the Southwestern Surgical Congress. She serves as a SESAP author for the American College of Surgeons. She is on the Editorial Board of The Journal of Trauma and Acute Care Surgery, The World Journal of Emergency Surgery, and Trauma Surgery and Acute Care Open, and reviews for an additional 13 journals in an ad hoc capacity. She has authored over 170 peer-reviewed articles and 70 book chapters. She has given over 100 national lectures and scientific presentations.

Eric M. Campion, MD is an Assistant Professor of Surgery at the University Of Colorado School Of Medicine and a Trauma and Acute Care Surgeon at Denver Health Medical Center. Dr. Campion began his medical career as a paramedic in Ann Arbor, MI. He then attended the University of Michigan where he received his doctorate in Medicine in 2006. Dr. Campion is Board certified in General Surgery and Surgical Critical Care. He serves as an instructor for Advanced Trauma Life Support and Tactical Combat Casualty Care. Dr. Campion is very active in many professional societies including the Eastern Association for Surgeons of Trauma, National Association of Emergency Medical Technicians, Southwestern Surgical Society and the Association for Academic Surgery to name a few. He is an avid teacher and lecturer to medical students and residents and has numerous publications and presentations.

Dr. Jamie Jones Coleman is the Director of Communications and Outreach for the Department of Surgery at Denver Health and an Associate Professor of Surgery at the University of Colorado School of Medicine. She is an acute care surgeon specializing in trauma, emergency general surgery and surgical critical care. She attended medical school at the University of Tennessee College of Medicine, followed by a general surgery residency at the Rush University/Hospital of Cook County integrated program. She then completed a trauma and surgical critical care fellowship at Grady Memorial Hospital through Emory University.

Her current clinical research is focused on the physiologic impact of sleep deprivation, stress and burnout amongst surgeons. She recently completed the largest study of continuous physiologic monitoring of acute care surgeons. She is an active member in national trauma organizations, serving on committees with both the Eastern Association for the Surgery of Trauma and the American Association for the Surgery of Trauma. She is also a medical media expert, public speaker, avid writer and blogger. Dr. Coleman and her work have been featured on Forbes, Huffington Post, LinkedIn, KevinMD, and US News and World Report. As a public speaker and medical media expert, she is uniquely positioned to discuss topics ranging from the current state of trauma care in this country to burnout.

LTC (ret) Charles J. Fox, MD, FACS is an Associate Professor of Surgery at the University of Colorado School of Medicine and Chief of Vascular Surgery at Denver Health Medical Center. He is a former program director for vascular surgery fellowship training at Walter Reed Army Medical Center, Washington, DC. He has a strong academic interest in combat casualty care and has deployed to Grenada, Kuwait, Bosnia, Africa, Iraq and Afghanistan. He is a former Special Forces medic from 11th SFG where he graduated Cum Laude from the University of Maryland, 1990, and subsequently served in the Gulf War with ODA 543. He graduated with distinction from the George Washington University Medical School, 1995. Following a Surgical internship at Walter Reed, he was assigned as the Battalion Surgeon to the 10th Special Forces Group in Stuggart, Germany. He returned to Walter Reed Army Medical Center in 1998 to complete residency training in General, 2003 and Vascular Surgery, 2005. Dr Fox is a Diplomate in the American Board of Surgery. His honors include Alpha Omega Alpha membership, the Malogne outstanding resident award, the Bailey K Ashford research award, and the A designator for clinical proficiency awarded by the US Army Surgeon General. He is a reviewer for the Journal of Vascular Surgery, Annals of Vascular Surgery, Journal of American College of Surgeons, Journal of Cardiovascular Surgery and is on the editorial board of the Journal of Trauma and Acute Care Surgery. He is an active member of several vascular and trauma societies. He has been invited to many visiting professorships in the US and abroad, and has published numerous peer reviewed-papers and book chapters on vascular trauma.

Her current academic interests are focused around REBOA and endovascular control of hemorrhage in both traumatic and non-traumatic patients. She previously founded one of the first endovascular trauma programs in the country. Additionally she recently completed a large study for the Department of Defense more precisely defining the physiologic impact of REBOA and is a national instructor for the American College of Surgeon’s BEST course. Dr. Hoehn speaks nationally and internationally on the role of endovascular techniques in emergencies. She is very excited to join the organization and hopes to expand the role of endovascular surgery at Denver Health.

Ernest E. “Gene” Moore, M.D. is an internationally renowned trauma surgeon and the Director of Surgical Research at Denver Health Medical Center. Dr. Moore has been editor of the Journal of Trauma and Acute Care Surgery since 2012, and was the Chief of Trauma at the Denver Health for 36 years, Chief of Surgery for 28 years and the first Bruce M. Rockwell Distinguished Chair in Trauma Surgery. He also serves as Vice Chairman for Research and is a Distinguished Professor of Surgery at the University of Colorado Denver.

Dr. Moore began his career at Denver Health in 1976, where he helped pioneer one of the nation’s first academic Level I trauma centers. Under Dr. Moore’s leadership, Denver Health’s Level I Trauma Center became nationally and internationally recognized for innovative care of the injured patient, and its trauma research laboratory has been funded by the National Institutes of Health for 30 consecutive years.

Fredric Pieracci, MD, MPH, FACS is from Chicago, Illinois. He received both his Bachelor of Arts degree in biology and his medical degree from The University of Pennsylvania. Dr. Pieracci completed residencies in both general surgery and general preventive medicine at the New York Presbyterian Hospital/Weill Cornell Medical College in New York City. During this time, he also obtained a Master’s Degree in Public Health from Columbia University. Additional fellowship training in Trauma, Acute Care Surgery, and Surgical Critical Care was completed at the University of Colorado and Denver Health Medical Center. He is currently the Trauma Medical Director, Medical Director of the Denver Health Surgical Weight Loss Program, and the Medical Director of the Thoracic and Pulmonary Nodule Clinics at Denver Health. He also maintains busy elective and acute care surgery practices. Dr. Pieracci is board certified in general surgery, general preventive medicine, and surgical critical care.