Ways to Give
TOP
Home 1918 Pandemic Flu versus Novel Coronavirus: Similarities and Differences 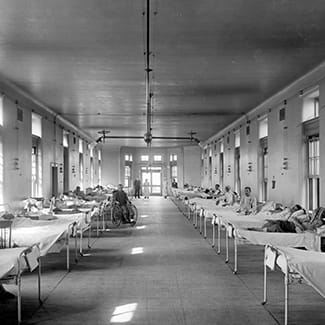 It's been more than 100 years since the world has seen a pandemic on the scale of the novel coronavirus (COVID-19). 102 years ago, the world was stricken by the influenza pandemic which commonly became known as 'Spanish Influenza' or 'Spanish Flu' and Denver, just like many other cities around the world, took drastic measures very similar to what we are doing through today to fight COVID-19. We reached out to Denver Health's historian, Eileen Welsome, author of 'Healers and Hellraisers,' for some historical perspective on the differences and similarities between the 1918 pandemic and the current pandemic, as well as our Chief of Infectious Disease, David Wyles, MD to tell us what it means from a medical perspective. This is the first of two blogs comparing the two diseases.

The Beginnings of 1918 Pandemic Flu in Denver

In September of 1918, a young woman named Blanche Kennedy returned to Denver from Chicago. She got off a train at Union Station and went home. In a few days, she became ill and died. Her brother, then a 24-year-old man living on Humboldt Street, was stricken with the virus next.

According to the Denver Post, Kennedy was believed to have been the first person in Denver afflicted with the pandemic flu, a disease that may have originated in an Army camp in the United States, jumped overseas, and returned to the U.S. in the early fall of 1918 in a more deadly form.

The Spanish Influenza raged out of control in Denver in two waves. The first began in late September of 1918. The second followed Armistice Day, November 11, 1918, when thousands gathered in public spaces to celebrate the end of World War I.

Health officials scrambled to keep up with the pandemic. Dr. William Sharpley, Denver’s top health official and longtime overseer of the County Hospital – Denver Health's precursor – writes that Denver was one of the first large cities to institute “drastic measures” to stamp out the disease.

On Oct. 5, 1918, Denver’s Board of Health ordered the closure of churches, schools, moving picture shows, lodges, pool halls, reading rooms and theaters. “Social gatherings” were banned, as were “public assemblages of any nature held within closed walls.” Sound familiar?

In 1918, the shutdown order came too late. The pandemic influenza had already gotten a foothold in Denver. In the four days preceding the order, the influenza had claimed the lives of nearly 20 people. (In the nation’s army camps, the death toll was staggering, with 4,408 new cases reported in one 24-hour cycle.)

The state health board was also involved in the effort to stop the pandemic.

The following bulletin was sent out to stop the spread of the pandemic flu, which has some eerie similarities to the state, local and national health orders of today:

Working and Living in Denver During the 1918 Pandemic Flu

Denver's reaction to the 1918 pandemic flu has a few key differences and some similarities to what we are seeing today with the novel coronavirus. Factories, workrooms and offices were allowed to remain open during the 1918 pandemic, but employers were warned to watch for the disease and send anyone home who had symptoms. Stores and markets also remained open. Shoppers were advised to avoid unnecessary excursions and to complete their transactions quickly.

People living in Denver, especially children, were urged to remain outdoors as much as possible. Residents were also advised to keep their windows open in order to bring fresh air into their homes. “All congregations of people, even in small groups of two or three are dangerous, especially if any one of the gathering has a so-called ‘bad cold,’” the city’s health board wrote.

Denver Health's and Other Hospital's Response to 1918 Flu Pandemic

Hospitals were directed to isolate influenza sufferers by putting them in private rooms. But at the County Hospital most patients were placed in long communal wards where the beds were separated by just a few feet. Screens were used to wall off the beds of influenza sufferers.

Nurses and attendants were urged to protect themselves by covering their noses and mouths with gauze. Despite the precautions, one of the early influenza deaths was a nurse at the County Hospital named Helen Azdorf.

A shortage of doctors and nurses soon materialized. Many had volunteered for World War I and had died or were still overseas. Oxygen, which was used to treat the victims, also was in short supply. When medical officials in Colorado Springs called their Denver counterparts begging for oxygen, they were told the city didn’t have any oxygen to spare. The Red Cross, in conjunction with Denver’s Board of Health, began an effort to mobilize the services of any woman who had enough experience to help in the pandemic.

Dr. Sharpley soon discovered that the greatest source of contagion were visitors to “sick rooms and infected houses.” In November of 1918, he wrote, “We encountered every obstacle, because the people could not or would not understand why they should not visit the sick. The placarding of houses and a rigid quarantine, which at the present time is in force, is lessening the danger somewhat.”

Health officials placarded more than 5,000 houses as the pandemic influenza burned through Denver. In one day alone, more than 500 homes were placarded. (Quarantines and placarding were two of the only tools that health officials had at the time and were routinely used to help contain the spread of diphtheria, scarlet fever, whooping cough, measles and other infectious diseases.)

The 1918 pandemic flu continued to spread through the city, attacking with such speed and ferocity that residents died without quite knowing what hit them. “People were just petrified,” Denver physician Harry Whitaker told the Denver Post in 1976. “Doctors and everybody. They saw it all around them. Sometimes whole families would go. It was something completely different and they had no idea how to protect themselves.”

Denver Health's director of Infectious Disease is David Wyles, MD. Dr. Wyles said that while equating the 1918 pandemic influenza with COVID-19 is convenient and frequently done, from a medical perspective, it is also fraught with pitfalls.

The viruses are similar in their genetic make-up and both can readily spread from human to human. For the 1918 pandemic flu, it was estimated that one infected person would infect two others with the virus. For COVID-19, the current estimated rate of infection is between 2.5 to 3.5 people for every one who has the virus. Mortality (death) rates between the two viral pandemics are also often compared, as Dr. Wyles explains:

"The mortality rate for 1918 pandemic flu is estimated to have been between 0.5 and 1.0 percent – however, much of the mortality appeared to be due to secondary bacterial pneumonias occurring in a pre-antibiotic era. Thus one could hypothesize that a similar epidemic today would result in significantly lower mortality. The current global mortality rate for COVID-19 sits at around three to five percent, with significant geographic difference."

Dr. Wyles said it is very likely that the COVID-19 mortality rate will fall as the scope of asymptomatic infections is better defined, but as of now, it appears the mortality rate for COVID-19 will remain well above that seen with the 1918 pandemic flu – particularly taking into account the dramatic improvements in medical care over the last century.

"Despite these differences and caveats, aspects that remain very similar are the core public health responses that were or are being implemented to stem both pandemics in Denver," said Dr. Wyles. "As colorfully told here, the principles relying on self-quarantine and closure of non-essential businesses were key to slowing down the 1918 influenza pandemic and have now been implemented in Denver (and across the globe) over a century later."

Watch for part two of the comparison of the two pandemics posted here in our blogs section next week. Stay up to date on the latest headlines involving the COVID-19 pandemic and Denver Health's response at DenverHealth.org/coronavirus.