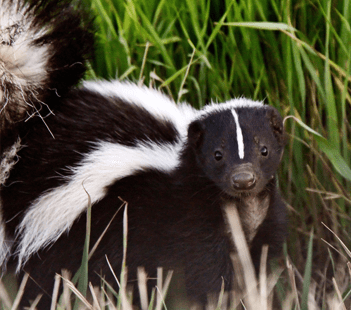 Rabies is a disease caused by a virus that attacks the nervous system. It is transmitted in the saliva through the bite of infected animals.

In Colorado and throughout the United States, many different wild animal species can carry rabies. Skunks and bats are the most significant sources of rabies in Colorado, but other wild animals can also be infected. Domestic animals, such as dogs, cats, horses, and livestock can become infected with rabies through contact with wild animals. Small rodents and rabbits do not usually carry rabies.

Rabies is becoming more common in wildlife along Colorado's Front Range, placing both humans and animals at risk for this deadly disease.

Rabid animals usually show abnormal behavior, such as aggression, confusion or lack of fear of people.

Contact with infected wild or domestic animals places you and your family at risk for rabies infection. Immediate medical treatment is required if a person or domestic animal is exposed to rabies. Rabies in humans is 100 percent preventable through prompt appropriate medical care. Your health provider, possibly in consultation with your state or local health department, will decided if you need the rabies vaccination series.

Rabies causes severe inflammation in the brain and spinal cord and is nearly always fatal. All mammals are susceptible to rabies, including humans.

What should I do if I am bitten by an animal?

If you or a family member has been in contact with an animal that could have rabies, seek medical attention immediately and contact your local health department. If you live in Denver County, call 311 to make a report. Call the Colorado Division of Wildlife office at 303-291-7227 if you have problems with wild animals.

In people, it may take one to three months for signs of rabies to appear. But once people get rabies, they almost always die. That is why it’s so important to go see a doctor right away if you’ve been bitten by an animal that might have rabies. Early symptoms of rabies in people include:

If the disease develops, symptoms include:

If a wild animal is acting strangely, stay away from it. Watch for:

Categories: Public Health
Welcome to MyChart!
Manage Your Healthcare From Anywhere, At Any Time