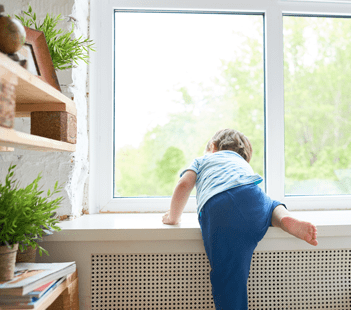 Each year we hear the unfortunate news of a toddler being injured or killed after falling from a window. A study cited by Safe Kids Worldwide says children under the age of five rack up 3,300 injuries from window falls each year in the United States.

Window falls occur most often during the spring and summer months when windows are open. Most window falls are from first, second and third story windows and happen to children under five and under.

Window falls are preventable with a few simple actions.

Keep all window cords out of the reach of children. Make sure that tasseled pull cords are short and that continuous-loop cords are permanently anchored to the floor or wall.

Categories: Public Health, Pediatrics
Welcome to MyChart!
Manage Your Healthcare From Anywhere, At Any Time