Ways to Give
TOP
Home A Cog in the Machine

A Cog in the Machine 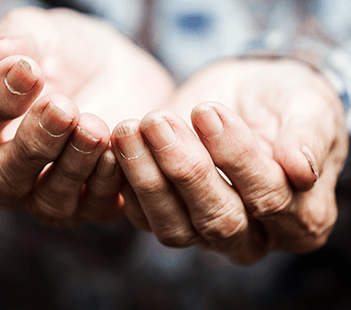 I am a hospitalist at a safety-net hospital. Through my  I have come to understand how our daily decisions – filtered through our own biases – influence how healthcare is implemented, and I had a personal teacher in my first year as an attending. Soon after starting my job, I met Mr. K. He was in his 40s, well kept,  and had the good habit of looking people in the eyes when talking to them. Originally from New York, he had been living comfortably as a middle manager in restaurant supply sales until an unexpected mixture of midlife crisis and wanderlust struck. He traveled the country looking for a new home and new opportunities. Once settled, a series of financial and family misfortunes found this thoughtful man on the streets for the first time in his life.

Mr. K had osteomyelitis – a bone infection – of one of his toes. The overlying ulcer made the diagnosis obvious, and the outcome of his hospitalization was apparent from the very beginning: amputation.

Osteomyelitis can be obvious or insidious, florid or restrained, minimal or destructive. These characteristics are not always because of the pathophysiology of the infection, but rather can be illustrative of the character of the broader health care system.

I cared for Mr. K for a week by arranging , coordinating surgery and optimizing his diabetes control in preparation for the operating room. In that time, he was often my friendliest patient to round on each morning. Having just started as a hospitalist, I felt relief in approaching his room each morning, knowing that our visit would be cordial and short. More than that, I felt deeply that he was the kind of patient meant for a hospital, one who needed timely, multidisciplinary acute care. On the sixth morning, as I ran through my cursory questions prior to his surgery, he elaborated on the true history of his condition.

He first accessed the medical system four months prior, complaining of foot pain. He was given pain medication and dismissed, never making it past the emergency department. He repeated this process twice more at different locations before, on the third visit, an ulcer developed. He felt strongly that the infection had been present for months, and on recounting the details of visits to various hospitals, it was apparent to him (and soon to me) the stigma associated with his homelessness prevented him from obtaining adequate care. His providers didn’t listen. With each interaction, medical professionals felt him to be either unreliable, looking for pain medication or hoping for some food and a warm bed for the night. He felt that if he had been heard earlier, he may have been able to keep his toe. I felt he was right. The consequences of this were not fully evident until two months later when Mr. K’s name returned to my patient list. He had been readmitted with fevers, and a repeat MRI showed the infection had not been controlled with the amputation and antibiotics. Now his fifth metatarsal was disintegrating, and the others appeared to be infected as well. This time, he would lose half of his foot. In contrast to the optimistic goodbye I had given him after our first encounter, I was nervous that he would return once or maybe several times, each time paying the price of admission with a greater portion of his body.

In retrospect, I wrongly assumed that I was part of a system of health care that was delivering comprehensive care to Mr. K, not despite his social condition but because of it. After all, health care providers rightly pride themselves on their mission. The problem isn’t with the ideals of the profession to commit to the sick and underserved, or with any of the providers who saw Mr. K in the beginning. Rather, the problem was with my understanding of how I should be working within this architecture. Joining a mission-driven profession doesn’t make you a part of that mission without consistent and grinding commitment. It is easy to forget on a particular day or with a particular patient that even though as a whole we may perform admirably for the patients we wish to serve, as individuals within the system we may fall short. It’s not possible or fair to say that one particular individual struggled to see what was happening with Mr. K, and it’s not important to him. (In fact, he is now doing well and was discharged into the care of his sons who came from New York to help him find a new home.) Rather, these cases are reminders that the system relies on individuals acting together.

The decisions we make on a daily or hourly basis influence how our hope for health care is implemented on an intimate level. In keeping that commitment individually, we bring ourselves closer to our shared goals, combating both our internal biases and the restrictions of an unequal system.

Categories: For Health Professionals, Hospital Medicine
Welcome to MyChart!
Manage Your Healthcare From Anywhere, At Any Time