Ways to Give
TOP
Home What Should You Do After Suffering a Head Injury?

What Should You Do After Suffering a Head Injury? 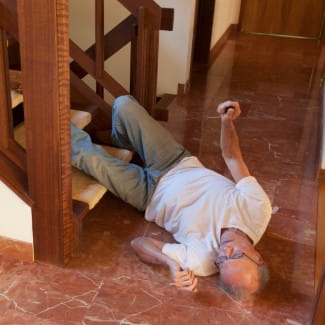 News about the celebrity deaths of comedian/actor Bob Saget recently and before that, actress Natasha Richardson are both sobering reminders that a head injury is not to be ignored and should never be taken lightly.

According to the medical examiner’s report, the Full House star suffered blunt head trauma, likely from hitting the back of his head from an unwitnessed fall before passing away on February 9. Saget was found dead in his hotel room. The death was ruled accidental, and no drugs or alcohol were involved. He was 65 years old.

A similar injury took the life of actress Richardson in 2009, after she fell and hit her head while skiing. The autopsy showed her death was also accidental, from an epidural hematoma due to a blunt impact to the head. She was just 45.

Hitting Your Head Can Lead to Traumatic Brain Injuries

Traumatic Brain Injuries (TBI) affect millions of people a year. At some point in our lives, we will either hit our heads on something, fall or know someone who did. And then come the questions:

She goes on to explain that as we age, the brain shrinks to a degree and puts different strain on certain vessels. Likewise, parts of our skull are not as thick as others (despite anyone telling you that you are “hard-headed”).

What to do After Hitting Your Head

No matter what the injury, Dr. Beauchamp advises that the answer to all the above questions is always better safe than sorry.

“Certainly – if you have a strong desire to sleep after hitting your head (even lightly on a countertop if you are over 40-ish) or repeated episodes of vomiting, memory issues or weakness then speaking to a health care provider is a must,” Dr. Beauchamp said.

It used to be common practice to wake someone up every hour to check on them after a head injury, but Dr. Beauchamp warns against this. She said it is not current practice and that decisions must be made at the time of the injury or shortly thereafter.

Dr. Beauchamp has treated thousands of both concussive sports injuries as well as ordinary head injuries, including the recent epidural hematoma injury of a 35-year-old woman who fainted and hit her head on the concrete floor while waiting to get a cup of coffee. She pointed out that even one head injury may be too many. “It is unknown how many TBI’s constitute “too many” – however minimizing risk would be a great place to start along with helmet use 100 percent of the time for sports where this is indicated.”

There is a difference between the types of injuries and each medical provider and program may have their own approach for evaluation and return to play. Dr. Beauchamp said that these rules must be followed as returning to school, sports or work full time while still having symptoms is not a good idea. The current mantra for sports related injuries is “when in doubt, sit them out.”

Dr. Beauchamp said if there is one message to get across it’s that there is never a time to be too safe after hitting your head. If you or a family member or friend is considering calling 911 after a possible TBI – then that is the right thing to do.

Welcome to MyChart!
Manage Your Healthcare From Anywhere, At Any Time