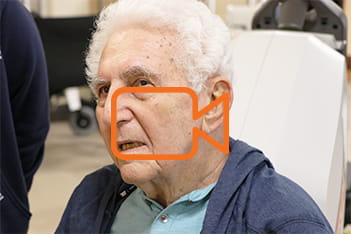 Watch this emotional reunion between Burton Litman and the Denver Health Paramedics who helped save his life.
On February 20, 2019, 83-year-old Burton Litman was flying home to Central Oregon after a trip to Florida to see his grandchildren. He had a layover in Denver, but never made his flight from Denver to Oregon.

"I remember landing in Denver; I remember calling my wife," Litman said.

His wife, Jeanne Freeman, remembers everything about that day, including the phone message Litman left for her. "It was a ... 'I made it to Denver, no problem, plenty of time, I'm walking to my gate, I'll give you a call when I get home to Oregon, I love you,'" Freeman recalled.

After that phone call, Litman's memory stopped. He went into cardiac arrest on Concourse B, at Denver International Airport (DIA) and became unconscious.

Bystanders jumped in and started giving him CPR and within minutes, Denver Health Paramedics Arthur Pliaconis, Robert Gardiner and Charlie Roberts – all stationed at DIA that day – arrived at gate B83 to try to revive Litman. They, with assistance from Denver Firefighters, Denver Police and DIA operations personnel started defibrillation.

Within minutes, Litman had a pulse and was breathing on his own again. Pliaconis and Gardiner put him in an ambulance and rushed him to the nearest hospital.

"Whoever had done CPR knew exactly what they were doing, because he was alive and he was responsive," Freeman said.

"The next thing I remember is coming out of bypass surgery, and I asked Jeanne whether this was a dream," Litman reflected.

"What the doctor did tell me was [my husband's] artery that was 95 percent clogged is the one that they call 'the widow-maker,'" Freeman said somberly.

Litman said he had never had any heart trouble his entire life. "I feel extremely lucky to be here."

On March 26, Pliaconis, Gardiner and Roberts all walked into the skilled nursing facility where Litman had been recovering and found a much different scene than the day they were called into action to save Litman's life. Emotions ran high, as never in his 13 years as a Denver Health Paramedic had Pliaconis ever been reunited with a patient he had helped save after a cardiac arrest. He reached out to shake Litman's hand and simply said, "Look at you, that's incredible!"

Litman told the three men that he wanted to thank them because, "I doubt I would have ever made it if it hadn't been for you guys." He believes they not only saved his life, but also saved him from potential brain damage or other complications.

"I'm feeling very good. Literally, I want to give a heartfelt thank you for all that they did and for bringing me to this point," Litman smiled.

"The thanks is not necessary at all, but just them reaching out to us allows us to reach back out to them," Pliaconis said.

Freeman said she plans to put a picture with the paramedics who ultimately saved her husband's life in with the family photos. "They get to be part of the family now too."

"We are all in this profession because of compassion and empathy and this is really nice to be able to see," Pliaconis said.

"I feel they are top of the line. Those guys are really good!" Litman said.

"This man has been the joy in my life and thank you for bringing my joy back to me," Freeman smiled.

Later that day after the reunion, Litman and Freeman flew back home to Oregon, where he continued to recover and is now walking on his own without a walker, using the treadmill for more than 15 minutes daily and going to cardiac rehabilitation three days a week. When they arrived at the airport to go home, Roberts met them at the gate and connected them with three of the bystanders who started the initial CPR that also helped save his life. Two are physicians assistants and another is a nurse.