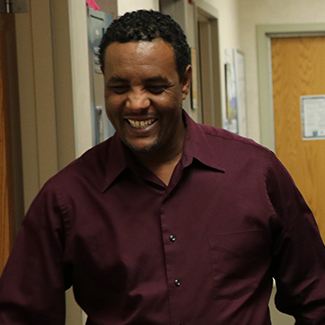 For nearly 40 years, Kemal Hebano lived with something that became normal to him, but looked to the world like a debilitating disability. A childhood injury and improper treatment of that injury had left him with a leg that was severely bent and a bad limp when he walked. By the time he was in his 40's and living in Denver, his leg had become bent at a nearly 90 degree angle and he lived with pain every day.

A Broken Leg Becomes A Deformity

Watch: Denver Health patient Kemal Hebano talk about how his life changed after coming to Denver Health.
The injury happened when Hebano was just eight years old and growing up in his native village of Kechama in Ethiopia. There, it was common for children to play around heavy farm equipment.

One day, while out playing with friends, he climbed up onto a tractor. Hebano explained, "When I climbed up onto the tractor, I fell down and broke my leg. So I ended up with a big leg deformity."

The long-term damage to his leg was a result of several factors. Doctors in Ethiopia had treated Hebano, but the surgeries were not done properly. Denver Health Orthopedics director Cyril Mauffrey, MD explained what occurred, "Kemal had an open fracture when he was eight. This open fracture that was treated at the time in Ethiopia, prevented part of his left leg from growing. So only one side of the leg kept on growing whilst the other side stopped."

Hebano lived in Ethiopia for another 27 years before coming to the United States and eventually to Denver in 2011, to pursue his degree in health care management from Metropolitan State University of Denver. It was here in Denver that he also found the appropriate medical care he needed. His first visit to Denver Health came in 2017 and a year later is when he first met Dr. Mauffrey.

Getting Help at Denver Health

Since moving to the United States, Hebano had consulted with several doctors about his pain and how to correct his leg deformity. One suggested he should have it amputated. Dr. Mauffrey at Denver Health took a different and more optimistic approach. He describes that first visit with Hebano.

Dr. Mauffrey recounts, "It was a pretty special encounter because he came in with a very severe limb deformity that affected his entire persona and the way he walked and interacted. This had affected him for so many years."

Hebano reflected on all the things he missed out on growing up as a child and into his teen and adult years. "I can't do everything like every normal person can do, because of that deformity. I can't walk properly, I can't run, I can't jump – things like that."

Undaunted by the severity of Hebano's deformity and explaining that Denver Health is used to treating people with severe injuries of all kinds, Dr. Mauffrey quickly went to work. It would take nearly two years, but Hebano was about to see his first glimpse at a normal life since he was a boy.

"Kemal underwent two major surgeries," said Dr. Mauffrey. "The first one was to correct the deformity, which essentially means breaking his bone close to the knee joint and realigning things. So we break the bone and put pieces back together, which corrected his leg and made it straight again."

Dr. Mauffrey then put him in a device called an external fixator, which is an external frame that stabilizes and holds the broken bone in proper position. Hebano would turn a dial every day to help straighten the bone.

"We were hoping through this first process that the leg would hold straight," said Dr. Mauffrey.

Then it was on to the second surgery. Dr. Mauffrey said because Hebano's leg had stopped growing for many years, he did a lengthening procedure. "We broke his leg in a different place, so that the bone grows to match the other side."

Hebano said, "After my first surgery and when I saw my leg straight, I was really happy and excited. Dr. Mauffrey, he is my life-changer!"

Hebano returned for a follow-up visit with Dr. Mauffrey in early 2020, almost two years after his first visit. There were smiles all around.

"I am extremely happy with Denver Health," said Hebano. The 45-year-old knows he is not the only one who has seen this type of severe deformity and wants people to know that they can get help.

In response to Gov. Polis’ guidelines on re-starting time-sensitive procedures and surgeries, a committee of Denver Health clinical leaders agreed to a gentle opening of limited outpatient procedures on May 4. This committee will monitor patient and provider safety, staffing, critical equipment and testing to reintroduce additional procedures in the near future.

Our highest priority will always remain the safety of patients, providers and staff, and COVID-19 readiness and response.