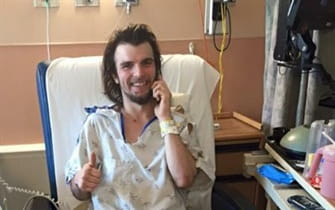 By Poncho Gigoon, father to Nick

My son Nick called me on a Monday morning in February and told me he was in the hospital after having been hit by a car. Not knowing right away the full details of exactly what happened, I was shocked, unsure at that time how bad he was. I just knew he was in the hospital in Denver, so I immediately left work in Michigan to get to my son as fast as I could.

Nick had been a victim of a hit and run on Super Bowl Sunday. He was on his way to watch the game and was struck by a car. Thanks to the person who dialed 911 and the speedy response of the EMS, he was given the life-saving care that made his trip to the hospital a success. Nick was rushed to Denver Health, where he was immediately provided treatment, and quickly moved to surgery, where a team of skilled specialists had him in better shape than we had expected. The outcome was AMAZING.

Although he required two more surgeries, when I saw him for the first time since the accident, he was in good spirits and happy to be alive – even able to move around a little. I had been at the hospital for only a few hours when I was greeted by one of his surgeons, who explained the extent of his injuries and what to expect from the next surgeries. His explanation was so thorough that he even drew a picture to explain the surgical procedure and the extent of Nick’s injuries. Along with internal bleeding, Nick had two broken femurs and a broken pelvis.

I stayed with Nick overnight and, if it wasn’t for the IV and monitors in the room, it would have been like staying at a hotel. The rooms were spacious and clean, and I was provided a fold-out bed to stay with my son. The next day he went in for another surgery and again everything was falling in place like clockwork – the staff explained what they were doing and why. All questions were answered in professional manner and in an understandable way. After a two-hour surgery, I got the call he was out and doing well. As a parent you always worry, but the surgeons eased my fears with their detailed explanations for Nick’s treatment and care. His surgeons – orthopedic surgeon Dr. Cyril Mauffrey and orthopedic fellow Dr. Stephen Stacey – were amazing.

When Nick was brought back to his room, he was sore but doing very well. As I was spending time with him, housekeeping entered and made us feel more comfortable by taking care of our mess and asking if there is anything else they can do for us (IMPRESSIVE). The nurses there must go through personality training classes since they had Nick feeling good about not being able to do daily activities. If there was something he needed, they were prompt to help make his pain level comfortable enough that he could keep his sense of humor. We are originally from North Carolina (and pull for the Panthers) and in a joking manner Nick said it must have been a Bronco fan that hit him. Hearing him joke that way shows just how comfortable the staff made him feel.

Not once did the Denver Health team make me or any of Nick’s friends feel uncomfortable or that we were in the way, hindering his care. I work in a hospital in Michigan as a phlebotomist so I understand what the health care world is about and how it works. The team at Denver Health went above and beyond what Nick and I expected.

Now months later, Nick still talks about the care he got and he is AMAZED how well he is doing from the injuries. He is able to walk without a cane, and able to sit and get out of a chair without assistance – all with little or no pain.

We have a way of saying THANK YOU in our native language of the Native American Chippewa clan: Chi-Miigwech! (Which means, BIG THANK YOU!)