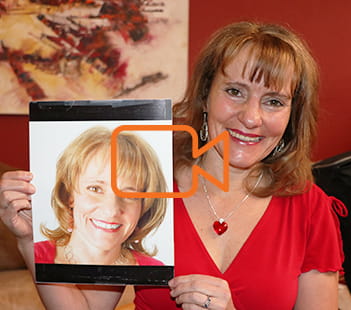 Birgit Mueller is a physical therapist at Denver Health who never thought that she would become a patient. During her 20 years of employment at Denver Health, she has treated numerous patients coming back from devastating injuries, but it was her own accident that nearly claimed her life.

Denver Health physical therapist Birgit Mueller talks about coming back from breaking every bone in her face.
In June, 2017, she and fiancee David Shinneman were staying at a nature sanctuary in Southern Colorado to celebrate his birthday. The two got into a hammock together. Five minutes later, one of the trees the hammock was attached to fell down and struck her.

"I broke all my bones in my face," Mueller said. She was in a coma and a helicopter flew her to a hospital in Pueblo. Doctors there told her fiancee they were not sure she would survive and if she did, she would never be the same. Because of the severity of those injuries, doctors in Pueblo called for another helicopter to fly her to Denver Health. Looking back on that day, Mueller said, "I'm so glad that helicopter brought me to Denver Health."

Denver Health ENT surgeon Scott Mann, M.D. saw the situation much differently. He told Shinneman the bleeding in Mueller's brain was not as bad as the doctors first thought and that he would be able to fix all the broken bones in her face.

"This is something that we see all the time at Denver Health," Dr. Mann said. "We had all of the team that we needed and all the tools that we needed to put her back together."

"He put 50 screws and 10 plates in my face to fix all my broken bones, and if you look at me [today], you can't see anything," Mueller said with a smile. "I look just the same as before, thanks to Dr. Mann! It's incredible."

Mueller spent weeks recovering in the Intensive Care Unit and acute care unit, none of which she remembers.

Shinneman said from day one of her injury, he could tell she was determined to return to work. Mueller came out of her coma and began working with her colleagues in Denver Health's Rehabilitation Department, led by Michael Blei, M.D., Chief of Rehabilitation Medicine. Her work involved physical, occupational and speech therapy.

Shinneman credits Dr. Blei with getting his fiancee up and walking again.

Beyond the facial trauma Mueller suffered, she also had to come back from a severe traumatic brain injury. That was affecting her ability to balance on her feet.

"The rehab system is integrated throughout Denver Health's trauma program," Dr. Blei said. "So to really get somebody through a full accident, it's trying to get them back into their full prior life, and [in Mueller's case] we achieved it."

What may have made the biggest difference in this case was Mueller's determination to get better.

"All the therapy got me back to functioning. I had to learn how to walk again," Mueller said.

After getting back on her feet, Mueller worked diligently with her close colleague and fellow physical therapist, Mary McHenry, to meet the requirements to return to work and re-certify her state license for physical therapy. She was approved to return to work with patients again at Denver Health's Bernard F. Gipson Eastside Family Health Center in February, 2018 – less than a year after her accident. She now works 30 hours a week doing what she loves – taking care of others.

Selistina Sailas is one of Mueller's physical therapy patients. She said, "I felt good to see her doing what she's doing, it made me feel hope for myself. I feel like I'm a survivor being helped by a survivor and there's nothing better than that."

"She should stand as an example of hope," Dr. Mann said. "As dire as things can look, it's possible to find someone's face again."

Shinneman recently looked at his soon-to-be-bride lovingly and said, "She is a miracle. It was a miracle that she came back on that day, and then all the things that happened [afterwards] were just little miracles."