‘A Lot More Life to Live’: Heart Attack Survivor Explains How Denver Health Is Giving Him a New Start 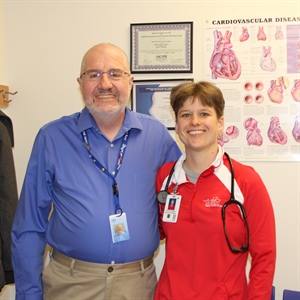 On Monday, October 19, 2015, I was at work when I suddenly developed strong chest pains. I was not exerting myself when they started; I was just sitting at my desk working on my computer. That was my first concern. The chest pains would not go away. After about twenty minutes with the chest pains, I told my boss that I needed them to take me to the emergency room. Since the pains were so strong, they decided to call an ambulance instead. That was definitely the correct decision.

I remember the entire ambulance ride and arriving at the emergency room at Denver Health. The Denver Paramedics wheeled me into an area where the first Denver Health employee I met immediately gave me a nitro glycerin pill to put under my tongue. He got me connected to the EKG machine in the hospital and took my blood pressure. After a few minutes with the nitro glycerin tablet under my tongue, he asked me the same question about the pain level on a scale of 1 to 10. I remember telling him that it was a little better but that was the last thing I remember until I woke up after 4 p.m. the following day. My partner was there and I asked him what time it was. When he told me, I remember asking him whatever had happened to Monday. It turns out that while in the emergency room, I had gone into complete cardiac arrest and that the medical team not only had to perform CPR, they also had to shock me with defibrillator paddles to get my heart beating again. I had suffered a moderate myocardial infarction – a heart attack.

When I woke up, my cardiologist, Dr. Emily Hass, explained to me that the cause of my heart attack was a 100% blockage in my left coronary artery. She was able to open the artery and placed a stent to keep it open, restoring blood flow to my heart. She informed me another artery was also almost completely blocked, so they would have to place another stent during a second procedure. All of my nurses, both day and night shifts while I was in intensive care at Denver Health, were wonderful. They took very good care of me and responded quickly if I had any need. I have had no chest pains since I left the hospital. Denver Health Nurse Practitioner Paisley Johnson has been assigned to my case and she is keeping me well informed on my heart health. I have had a Contrast CT Scan and an echocardiogram run since I left the hospital. It has been discovered I have a small aneurysm in my aorta, but we are going to try to manage it with medicine and run additional tests later to monitor the progress of the medicines on it. Needless to say, after such fantastic treatment at Denver Health, I will not be returning to my other cardiologist that I was seeing prior to my heart attack.

I consider myself mostly recovered from my heart attack and am now attending the cardio rehabilitation exercise program at Denver Health that has a much friendlier schedule that fits with my job. The staff that runs that program has been tremendously helpful. They have shown me videos about my heart health and provided me good information on the diet I should be eating to protect my heart more. I love the exercises that I perform and have expanded beyond just a treadmill. I am now doing some elliptical exercises, stationary bike and stair steppers along with some light free-weight lifting.

I always look forward to my appointments because I feel so much better and so much better taken care of at Denver Health. At only 58 years old, I have a lot more life to live and am now hopefully on the right path to make that happen.

Many thanks go to all the staff that has assisted me since I arrived in the emergency room at Denver Health on October 19, 2015. I would not be here without them and also without the love and support of my life partner of 27 years!