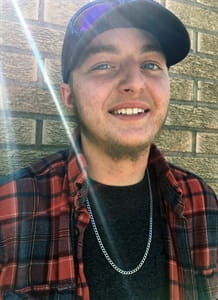 I lost all hope of ever transitioning into a man at a young age because I’m from the South. I come from Locust Fork, Alabama, and I was the first in-your-face-deal-with-it, hate-me-or-love-me-I-don’t-care lesbian there ever was. And they all had no idea how to handle it.

When I was younger, I was one of those people who enlisted in the military because I wanted to become someone better. People who come from Locust Fork, Alabama, die in Locust Fork, Alabama, and I never wanted to be one of those people. I wanted to do something with my life and I did. I look back at the people I was friends with, and I can do nothing but look ahead now, because I’m doing alright.

I’d say my transition really started when I got to Colorado four years ago — and listen, there may be some potheads here, but they’ll give you the shirt off their back. I was out in California before that, still in the military, and if Alabama didn’t kill my dreams of transitioning, the military did. It was always just that “iffy” situation that you don’t go around talking about. I was tired of that.

The crazy thing was when I moved, I had no idea how hard it was going to be to make it here. We looked at the rent prices and it was 600 to 700 bucks, then two weeks later, something changed and everything spiked, and I thought, “Oh my god, we’re gonna die.” We were on the streets for two months. My daughter, who’s five going on 16, was so sweet. She thought of it as the vacation of vacations. She kept asking, “When are we gonna go sleep in the car again?” I’d say, “Never, child!” I will do everything in my power to keep her from ever having to sleep in that car again.

In the end, coming here was everything I always needed. I had to go through that struggle to get to this point.

I think I first heard about Denver Health from a group on Facebook. I’m a part of so many social media groups that focus on female-to-male surgery topics, hysterectomy topics and bottom surgery topics. My sister-in-law had recently gone to Denver Health for care, and she said it was absolutely fantastic. So I figured I’d give it a shot. Now my wife and I both use Denver Health for everything, every bit of it, and that’s saying a lot because we live in Thornton and drive all the way here every time, just because we love it.

Before this, I didn’t really have a doctor who seemed to care. But then I started talking to Denver Health, and they just seemed like they cared from the start. What was amazing was Denver Health said to me, “Let me look into this for you, so you don’t have to.” That was wonderful to hear, and what I needed because I’m busy and always working and I couldn’t look into surgery as much as I wanted to. They never minded doing the work I couldn’t do, and that’s fantastic.

But, it was a little rocky of a process getting there. I was probably rude and impatient waiting for this all to happen. We scheduled the surgery for August, and I was so excited because my birthday is in August, and what better of a birthday present to have than this? Then something happened with insurance, and they said they’d cover it, but I had not quite hit my year mark with taking testosterone, so we had to postpone, and that was like the worst news I could have had at that time. I literally had a mental breakdown, and it took me a couple minutes to realize that it didn’t mean it wasn’t going to ever happen. It was just another hurdle I had to jump in life, and man, I’ve dealt with a lot of them, so why not overcome another one? After that another date was set, and Denver Health made sure to get the surgery scheduled less than a month out, and treated me so well throughout the whole process.

I had my breasts removed in October 2016. Denver Health did a wonderful job. My surgeon, Dr. Ash Ignatiuk, could not have treated me any better. That is one thing people talk a lot about in the trans community — that they had a surgery done and they were treated horribly. At Denver Health, no one was ever rude to me, not even for a single second. I could remember feeling completely uncomfortable from the waist down, because no one likes to be butt naked in front of a stranger. They understood I was under a lot of stress, and an anxious person to begin with, and they took the time to help me with my anxiety and reassured me I was in good hands. I really did feel that I was safe before I closed my eyes for that surgery. They truly took care of me, when I was cold they brought me extra blankets — it was absolutely fantastic from start to finish.

Healing has been pretty good since then. You know there’s a lot of people who go in there for a surgery, and they don’t look so wonderful afterwards, and they’re super upset about it, whether it’s having “dog ears” leftover or pieces of skin in the center, I don’t have any of that thanks to Dr. Ash. Paige Jackson, my LGBT patient navigator, sent me an email explaining who she was, and has been with me ever since then. Me and my wife will be talking and think, “I don’t know, who do we ask?” and we always say, “Paige, of course!’” Paige knows everything. If you need something, you just ask her and she can always point you in the right direction. I also had somebody helping with my surgery who was learning and choosing which medical fields to go into and study, and he chose to be an anesthesiologist because of the experience he had during my surgery. He tracked me down when I was going to the dermatologist one day for something completely different, just to tell me, “Hey, you’re awesome, I’m happy you did what you did, and this is why I’ m doing what I’m doing.” He didn’t have to do that! People at Denver Health make a difference and care about everything they’re doing. They do everything they can. They go the extra mile.

And they didn’t have to do everything they did for me.

If I had advice for others starting the journey I went through it would be this: It's hard enough being transgender, don't be afraid to cut ties, even if it's family. People are more likely to come around when they realize they'll lose you if they don't and if they never realize it, don't stress it. You're better off without them, even if it's your own mother. You receive too much negativity from the outside world to receive it from "friends" and "family," too. It's such a relief when you stop worrying about them and worrying about what's going to make you happy. Always stay strong and don't lose hope.

The world is changing on a daily basis and we have a lot of allies who are out there changing it for us.

I’m hoping Denver Health can keep moving forward on their surgeries and what they’re doing and I’m hoping I can be a part of it. I’m excited to see what they’re doing. I’m going to have to hold back for now on doing their bottom surgery, because that’s a big deal for me. I’ve done a lot of research when it comes to bottom surgery, and those surgeries just aren’t far enough along yet. So I’m just holding steady until more advancements have been made, but I know once they have — Denver Health is going to take it another step forward like they always do. I have a lot of hope for them. I wasn't given any options for transitioning and had very little hope until my experience with Denver Health.

Then I had all the hope in the world.