Shot in the Heart and Survived 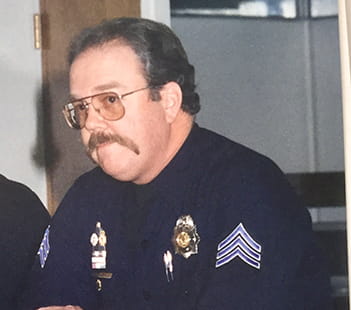 I was a Denver police patrol sergeant on June 3, 1987 when a report of a gunfight with an officer down at 40 S. Pennsylvania was aired over the police radio. I was close, and was the first officer to arrive. The location was quiet, it looked normal. I stopped in the middle of the street and spotted an officer just south of me. I ran to him, the area was still quiet. He was a training officer, and told me his partner had been shot. I told him to stay where he was and cover me. I ran across the street to the wounded officer. It was still quiet, other than the approaching sirens. The wounded officer, Jim Wier, was lying on the sidewalk, unconscious and struggling to breathe.

Sgt. Pete Diaz arrived, and took a position behind me. The suspect reappeared, and began shooting. Pete and I returned fire. I reloaded, and was hit when I rose to fire again. I had been shot in the heart and lung. I crawled to a better cover position to prevent the suspect from attacking us from the side.

Denver Health paramedics soon arrived to take us to Denver Health (then Denver General Hospital).  Doctors and nurses met us at the hospital and began treatment. I was conscious, answering questions, when someone took my blood pressure as 60/40. Immediately, the doctors swarmed around me. They prepared me for surgery, hooking up machines, tubes and wires.  One doctor was cutting me to install a chest tube. I had seen other people go through this over the years. Those previous experiences gave me confidence that I would be OK. The old saying was, if you got into Denver Health alive, you would stay alive.

I woke up the next morning, full of wires and tubes. I was in intensive care for three days. The doctors and nurses were confident of the quality of their work, and let me know that I would recover completely. I was put in a private room for two days and released. The entire time everyone at Denver Health treated me very well, and made me as comfortable as possible under the circumstances.
Everyone was competent and professional. As always, I was impressed.

Officer Wier unfortunately died at the scene that night. Sgt. Diaz survived and resumed his duties.

After my stay at Denver Health, I recovered and went back to full duty after a couple of months. I retired in 1997, got married and opened an antique store with my wife in Cañon City. Now we are enjoying retirement.