Learn more about asthma and what can trigger it below. 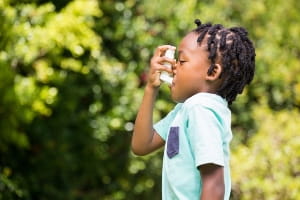 Is Your Asthma Under Control? 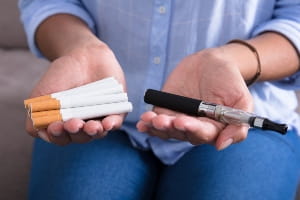 Children with allergies may be more sensitive to cigarette smoke than others, and research studies indicate that smoking may aggravate allergies. Smoking does not just harm smokers but also those around them. Research has shown that children and spouses of smokers tend to have more respiratory infections and asthma than those of non-smokers.

In addition, exposure to secondhand smoke can increase the risk of allergic complications such as sinusitis and bronchitis. Common symptoms of smoke irritation are: burning or watery eyes, nasal congestion, coughing, hoarseness and shortness of breath presenting as a wheeze.

Does Secondhand Smoke Relate To Asthma?

The means by which secondhand smoke triggers an asthma episode is believed to be through its irritancy effects. That is, smoke irritates the chronically inflamed bronchial passages of asthmatics. This is a different pathway from most of the other environmental triggers of asthma, like dust mites and pet dander, which trigger asthma episodes through allergenic effects.

Exposure to secondhand smoke is also known to cause a variety of other negative health consequences, including lung cancer, ear infections in children, and respiratory illnesses.

Many of the health effects of secondhand smoke (including asthma) are most clearly manifested in children. This is because children are particularly vulnerable to secondhand smoke. This is likely due to several factors, including the fact that children are still developing physically, have higher breathing rates than adults and have little control over their indoor environments. Children receiving high doses of secondhand smoke, such as those with smoking mothers, run the greatest relative risk of experiencing damaging health effects.

Actions You Can Take:

The dust mite may be an important cause of asthma and some skin problems. The house dust mite can only be seen with a microscope, but it is a common and significant cause of sensitivity. It may make the nose run or cause sneezing and wheezing. The dust mite hides in the dust that can be found in even the cleanest bedroom - deep in carpets and curtains and in the seams of mattresses.

Bedding: The dust mite is choosy and prefers wool and cotton to artificial fibers. So you can deter it by using only synthetic bedding materials and by washing all sheets every week. A duvet reduces laundry, but feather, down or flock fillings must be avoided in these and in pillows. The dust mite's favorite haunt is bedding, particularly mattresses.

Measures to reduce the numbers of house dust mites:

Your pet’s dead skin flakes, urine, feces, saliva and hair can trigger asthma. Dogs, cats, rodents (including hamsters and guinea pigs) and other mammals all can trigger asthma in individuals with an allergic reaction to animal dander.

Proteins in the dander, urine or saliva of warm-blooded animals (e.g., cats, dogs, mice, rats, gerbils, birds, etc.) have been reported to sensitize individuals and can cause allergic reactions or trigger asthma episodes in individuals sensitive to animal allergens. The most effective method to control animal allergens in the home is to not allow an animal in the home. If you remove an animal from the home, it is important to clean the home (including floors and walls, but especially carpets and upholstered furniture) thoroughly.

Pet allergen levels are reported to stay in the home for several months after the pet is removed, even with cleaning. Isolation methods to reduce animal allergen in the home have also been suggested by reputable health authorities, (e.g., keeping the animal in only one area of the home, keeping the animal outside, or ensuring the allergic or asthmatic individual stay away from the animal) but the effectiveness of these methods have not been determined.

To the contrary, several reports in the literature indicate that animal allergen is carried in the air and by residents of the home on their clothing to all parts of the home, even when the animal is isolated. In fact, animal allergen is often detected in locations where no animals were housed. In these situations, it is assumed that the allergen was carried in on people that have animals or on people that have been around animals or people with animals.

Often, people sensitive to animal allergens are advised to wash their pets regularly. Recent research indicates that washing pets may only provide temporary reductions in allergen levels. There is no evidence that this short-term reduction is effective in reducing symptoms, and it has been suggested that during the washing of the animal, the sensitive individual may be initially exposed to higher levels of allergen.

Thus, the most effective method to control exposure to animal allergens is to keep your home pet free. However, some individuals may find isolation measures to be sufficiently effective. Isolation measures that have been suggested include keeping pets out of sleeping areas, keeping pets away from upholstered furniture, carpets and stuffed toys, keeping the pet outdoors as much as possible, and isolating sensitive individuals from the pet as much as possible.

Actions you can take:

Combustion pollutants are gases or particles that come from burning materials. The common fuels burned in household appliances are natural or LP gas, fuel oil, kerosene, wood or coal. The types and amounts of pollutants produced depend upon the type of appliance, how well the appliance is installed, maintained, and vented, and the kind of fuel it uses. Some of the common pollutants produced from burning these fuels in household appliances are carbon monoxide, nitrogen dioxide, particles (or particulate matter). Other pollutants that can be produced by some appliances are unburned hydrocarbons and aldehydes, and sulfur dioxide.

Three combustion pollutants in particular could affect people with asthma. Both nitrogen dioxide and sulfur dioxide can cause irritation of the respiratory tract and cause shortness of breath. People with asthma may be more susceptible to the effects of nitrogen dioxide and sulfur dioxide. Also, particulate matter may decrease lung function in asthmatics.

Combustion always produces water vapor. Water vapor is not usually considered a pollutant, but it can act as one. It can result in high humidity and wet surfaces. These conditions encourage the growth of biological pollutants such as house dust mites, molds and bacteria.

Actions You Can Take:

Allergens, especially those containing biological matter, such as house dust mites, cockroaches, pet dander, pollen, molds, spores, bacteria and viruses, are known to cause or aggravate asthma. Allergic reactions often combine with and seriously aggravate the symptoms of asthma, the common cold, pneumonia and other conditions. Allergens also may cause eye, nose and throat irritation, shortness of breath, dizziness, lethargy and fever.

Allergens, especially those containing biological matter, such as house dust mites, cockroaches, pet dander, pollen, molds, spores, bacteria and viruses, are known to cause or aggravate asthma. Allergic reactions often combine with and seriously aggravate the symptoms of asthma, the common cold, pneumonia and other conditions. Allergens also may cause eye, nose and throat irritation, shortness of breath, dizziness, lethargy and fever.

Molds can be found almost anywhere; they can grow on virtually any substance when moisture is present. Outdoors, many molds live in the soil and play a key role in the breakdown of leaves, wood and other plant debris. Without molds, we would all be struggling with large amounts of dead plant matter. Molds break down plant materials by digesting them, using the plant material for food.

Molds produce tiny spores to reproduce, just as plants produce seeds. Mold spores waft through the indoor and outdoor air continually. When mold spores land on a damp spot indoors, they may begin growing and digesting whatever they are growing on in order to survive. There are molds that can grow on wood, paper, carpet, foods and even dynamite. When excessive moisture or water accumulates indoors, mold growth will often occur, particularly if the moisture problem remains undiscovered or unaddressed. There is no practical way to eliminate all mold and mold spores in the indoor environment; the way to control indoor mold growth is to control moisture.

Molds can trigger asthma episodes in individuals with an allergic reaction to mold. If mold is a problem in your home, you must clean up the mold and eliminate sources of moisture.
Wash mold off hard surfaces and dry completely. Absorbent materials, such as ceiling tiles and carpet, may have to be replaced if they are contaminated with mold. Fix leaky plumbing or other sources of water. Keep drip pans in your air conditioner, refrigerator, and dehumidifier clean and dry. Use exhaust fans or open windows in kitchens and bathrooms when showering, cooking, or using the dishwasher. Vent clothes dryers to the outside. Maintain low indoor humidity, ideally between 30-50% relative humidity. Humidity levels can be measured by hygrometers which are available at local hardware stores.

Water pipe or narghile smoking is an old practice that has experienced a resurgence in popularity, particularly in areas where cultures mix, such as in Israel with its large Jewish and Arabian cultures.

Europe has seen increasing narghile smoking, particularly in student populations. In the United States, little, if any, data is collected to assess the prevalence of water pipe smoking (WPS), but trends similar to Europe’s may be occurring. WPS may have a degree of perceived acceptability different from cigarette use due to mistaken beliefs that it is safer and non-addicting. More than 100,000,000 individuals are narghile smokers, concentrated in the Arabian Peninsula, Turkey, India, Pakistan, Bangladesh and China. Narghile smoking often occurs in groups, with several individuals sharing one pipe and passing the mouthpiece from person to person.

The water pipe is a device that allows the smoke from a combusting material (tobacco) to be pulled through water or another liquid, such as alcohol, and inhaled. The tobacco may be pure or mixed with varying amounts of honey or sugar, added oils, fruits or other flavors. The tobacco is burned by placing it next to ignited charcoal. Several additional concerns exist with this form of smoking in comparison to cigarette smoking. Using charcoal to burn the tobacco adds to the particulate load that is inhaled, may result in high carbon monoxide exposure, may have more nicotine content and may contain heavy metals such as chromium, arsenic or lead. The manufacture of tobacco used in WPS may be less regulated than that of cigarettes. Malignancies are well-described among WPS users, including tumors of the lungs, esophagus, throat and mouth. Pre-malignant states seen in cigarette smokers or user of smokeless tobacco are also seen in narghile water pipe smokers. Low birth weight, oxidative stress and dependence are described with WPS as well.

WPS is different from cigarette smoking in additional major aspects. A piece of the same pipe is passed from person to person, conferring an infectious risk. H. pylori has been noted in increased levels in narghile smokers. Marijuana smoking in a water pipe has transmitted tuberculosis. Pulmonary aspergillosis has been described as an adolescent narghile smoker who was undergoing cancer chemotherapy. WPS use may confer extra risk of transmission of hepatitis C, Epstein-Barr virus, herpes simples, other respiratory viruses and possibly HIV.

Narghile or water pipe smoking is not a benign practice and should not be viewed as safer than cigarette smoking. Many of the same risks exist along with additional risks unique to WPS. This may be an increasing important risky behavior in the United States, especially among adolescents. The social aspects of narghile smoking may provide an additional inducement to engage in the practice.