The Angel with a Mustache 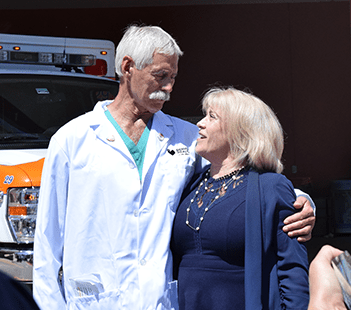 When the car came to a stop, I found myself through the floorboard on the passenger side. I had enough strength to push myself back into the seat and take stock of what had just happened. Oh... we have been in an accident. Although critically injured, everything seemed to work in my favor that morning because the angels were there to see me through the day!

The first angel – was a business owner who heard the crash and dialed 911 prior to going outside to see what had actually happened, so that within seconds of impact, Denver Health Paramedics were on their way to make sure I made it to the emergency room.

I was experiencing some difficulty with breathing and shortly thereafter my vision shut down as if someone had spun a kaleidoscope. My brain and mind were processing everything and I had the cognitive thought, “I must be going into shock.” I remember people coming to the car and asking, “Are you OK?” I distinctly remember clutching my abdomen and responding, “No it hurts.” I seemed to remain conscious until I heard someone say, “The paramedics are here.” They were the second set of angels.

Now to the third set of angels. The next thing I remember is hearing conversations and realizing I must be in the ER (I still could not see) and then kicking a physician who was putting an iv into both my ankles. Then the last thing I remember in the ER was stating “I can’t breathe,” and someone saying, “There goes her other lung.”

The trauma team’s assessment was that I had multiple internal injuries including broken ribs, collapsed lungs, and ruptured arterial walls, liver and spleen.

I awoke in the ICU around 11 p.m. A nurse was with me and began to tell me where I was and what had happened. The next thing I recall was seeing my mother, father and brother in the room and me (in my intubated state) giving them an “OK” symbol and writing on a yellow legal pad, “I’m OK!”

Additionally, I will never forget those first two–three days in the hospital, awaking periodically in the ICU and seeing (through a morphine induced haze) an 'angel in white' standing at the end of my bed sporting a big mustache. That angel was my surgeon, Dr. Ernest E. ‘Gene’ Moore. Dr. Moore seemed to be there often when I awoke. The trauma team attributed my rate of recovery to a “positive mental attitude,” a term I had never heard before and did not know I possessed. I could not have done it without Dr. Moore and the entire Trauma team!

To this day, I have no conscious memory of pain from my injuries, but definitely remember the Denver Health Paramedics pulling my boots off and putting in the iv's. I am guessing shock and the subconscious apparently have a way of blocking a person's ability to remember the pain.

From a former patient, thank you Dr. Moore for your dedication to pioneering Trauma and Shock research and science worldwide. I am fully recovered and will never forget what you and your team did for me that day.